Christmas/ New Year had been a busy season for cakepops. There are so many cute festive cakepop inspiration online and I was a little over ambitious in wanting to make all of them at once.

Here are some of the highlights of the season-

The evolution of the reindeer pops:

The first batch of reindeer I made had a more handpainted face, with mini red M&Ms as noses and I used the tip of the chipstick to handpaint their eyes and I dyed white chocolate to handpaint mouths on them. The process was definitely very labor intensive and the eyes needed to be dotted at the right place on first try. 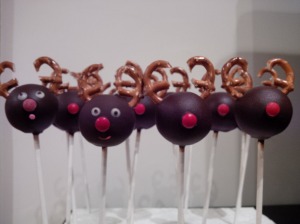 And then I found some white candy (the little blue box on the right hand corner of the pictures with all the ingredients) that were of perfect size for the reindeer pops and so Reindeer version 2.0 were made =)

Those small white candy were a little hard to find so when I ran out of those, I started using the limited edition M&Ms which are much bigger and a bit smaller to stick. But I actually quite like the version 3.0! They look more comical with their oversized eyes and nose 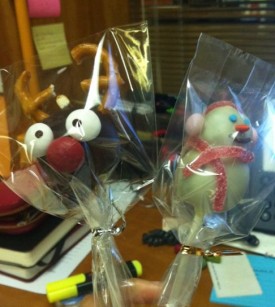 The mini pretzels were the ideal size for my pops but such a pain to cut. The pretzels kept breaking at different joints and I used almost half a pack for just 20 reindeers. Frustrated, I ate almost all the pretzels that falls under “failed attempts” :p

I literally had just 40min of power nap before heading to work the next day. I was definitely too over ambitious trying to make reindeer, snowman and gingerbreadman all in one night!!

More on the other two pop designs on the next post =)

One thought on “Piece of Cake- Christmas/ NY cakepops”