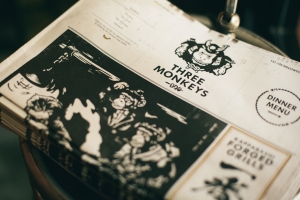 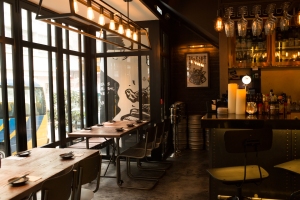 See no evil, speak no evil, hear no evil; Three monkeys refers to the three partners John, Brian and Alex. The trio comes from very different fields but are united by the passion for great food, drinks and dining experience to start this trendy gastropub. John, who also owns Gyotaku, is noted for his extravagant fusion style in Gyotaku’s menu. Brian manages artist such as MC Jin and Far East Movement and loves to cook. Alex was in finance before spending months mastering the art of gelato-making in Italy, he is the guy behind all the decadent gelato served in three monkeys.

Three monkeys had been generating quite a lot of buzz with the eye- catching panels with quirky, animated mascots long before it was opened. I kinda miss the mysterious, secretive vibe it had in its early, soft opening days =) Once the panels were taken down, you can see the raw industrial loft like interior through the glass windows, the high ceiling, the exposed light bulb and the use of metal beams. I like going to Three monkeys be it just for drinks or a proper sit down dinner; the vibe is always fun, cozy and lively.  You could start your night getting custom blend Japanese style cocktail at the bar downstairs. I love the Sakura, which is made of Awamori, it was deceivingly easy to drink, but I was super buzzed after 3 glasses of it. There’s also a long list of alcoholic beverages from sake to shochu, whiskey to handcrafted Japanese beer, to bubbly available. 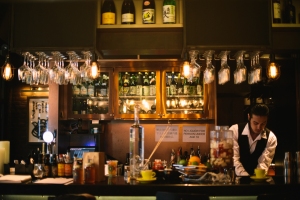 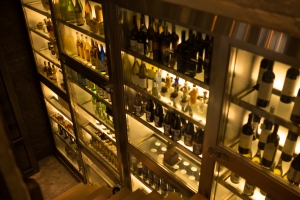 Besides spoiling patrons with the choices of drinks, three monkeys also serves delectable yakatori, one of their secret weapon is the handcrafted grill forged by ironmonger Kama- Asa from Kappabashi Japan. It can heat up to 850 degrees which allows food to be cooked in a very short time, retaining the freshness and the original flavor of the ingredients; there’s also a flow of fresh water running under that grill so oil and grease that drips down doesn’t collect and give a greasy smell or taste. The water also create steam which helps keep the grilled items moist.

I LOVE the Lobster chawanmushi (steamed egg); once we removed the lid we were hit by the intense aroma of black truffle which lingers in the air as we consumed the decadent dish; the steamed egg silky smooth and the lobster firm, and juicy. I enjoyed every bite/ slurp of it. 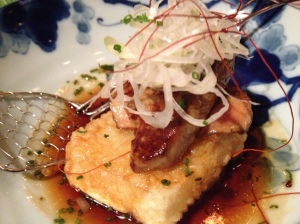 Foie gras tofu toast -Both the tempura tofu and the pan-seared foie gras were crispy on the outside and soft and smooth on the inside. The lightness in tofu balances the richness of foie gras. 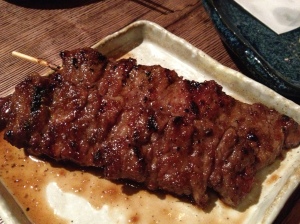 The Kalbi Beef was like yakitori with a Korean twist, the marinade made the deliciously tender short rib even more rich and decadent with both savory and sweet flavors. 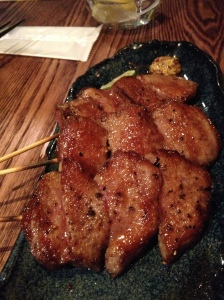 I don’t touch Ox tongue but friends loved three monkey’s ox tongue! Their ox tongue is different from the other yakitori’s in that they are cut much thicker, the grill that was mentioned earlier allows them to grill the thick cuts to perfection. The end result was melting tender and meaty. They also serve it with whole grain mustard which brings a kick to it

The outside of the yam was slightly browned and almost caramelized and moist on the inside. They were so good on their own I din even touch the butter that comes with it. 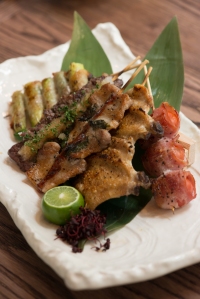 The tomato wrapped in bacon was a melting pot of flavors and textures! Crispy savory-peppery bacon VS the sweet juicy cheery tomato. 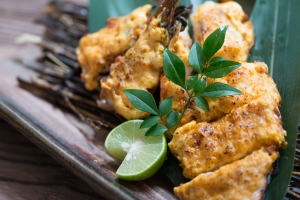 I was excited about the tiger prawn but the topping (Uni with mayo paste) was a little too overwhelming and overshadowed the subtle sweetness of the fresh tiger prawn.

I miss the mochi they served on their opening day- Jess (www.eatwithjess.com/three–monkeys) and I parked ourselves on the second floor right next to the grill while everyone kept themselves busy at the bar downstairs. We managed to ambush quite a few dishes that were going out of the kitchen/ grill **scored** The mochi with cheese was heavenly! The outside of the mochi was crispy and chewy while the inside is molten with cheese oozing out. They still serve a similar dish on the regular menu now but the one served that day was definitely better.

Tada… dessert time, I don’t typically eat much ice cream or anything cold but I had three fat scopes of their homemade gelato all by myself- the Pistacchio, the Hokkaido Milk and the Stracciatella. They were all very smooth, creamy and velvety with the pistachio being my favorite. 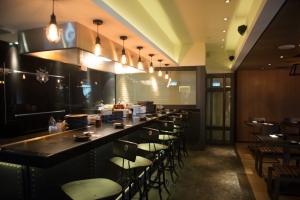 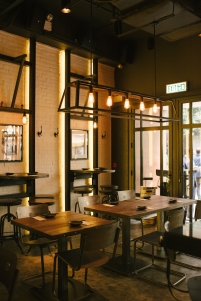